Today was my day off from exercising and I’m kind of glad. I felt pretty crummy last night and this morning, so I don’t think I would’ve run very well today. After a nice lunch with my madre, I got lots done around here, including two different projects! I am on a roll with the projects lately.

I had all of the ingredients and had been meaning to make it for quite some time. Today was the day. I’ve read lots of variations of recipes and decided to go with this one at One Green Planet. It uses less corn starch and baking soda, both of which apparently have caused skin irritations for other people. I have quite sensitive skin, especially in the underarms, so this formula seemed like the best fit for me. My only variation was to add 5 drops of tea tree oil — enough for some bacteria fighting power but not enough to be overwhelming in smell.

I’ve been using coconut oil lately, anyway, as a deodorant/anti-chafing before I run, so it’s probably good that I don’t have to stick my fingers in the jar anymore.

Usually coconut oil is quit firm, but since it’s been so warm here, mine came out of the jar and mixed up quite easily, no need to melt it. It did get a little messy, but came together surprisingly quickly.

Briguy came in at this point and thought I was just doing the coconut-as-deodorant thing again. When I explained that I was actually making my own deodorant, he gave me the sideways/arched eyebrow/eye roll and called me a hippie under his breath. Check!

I thought it looked a lot like icing… but resisted the urge to lick it. I even added another small scoop of coconut oil to help it firm up.

I decided to store it in a small jar and apply it with my fingers. I’ve been using a crystal deodorant for a while now, which has worked just fine. But I can’t apply it unless I’ve just bathed because the crystal absorbs the smell from your armpits. Enter the need for another deodorant that I can apply in between showers.

I applied it as soon as I was done in the kitchen, still smells fresh! (I may or may not have made Bribri smell me…) I like the smell, but the texture was grainier than I was expecting. Just be gentle when applying it unless you want some exfoliation every time.

This combined my love of taping and painting. It was really easy, but not the quickest process. I cut letters out of washi tape and applied them to some water color paper that I simply folded in half to create a card. I also applied a strip of tape just past the fold to give me a nice clean edge.

I pressed the letters down all over, making sure there were no loose edges, and painted over everything with the colors I had chosen. After the paper was dry, I peeled the letters off and voila!

My final touch was to add a wee foil heart in the corner. 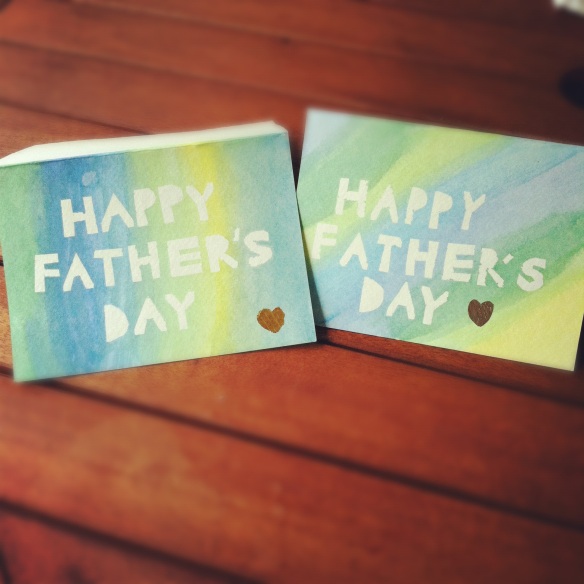 They’re no Hoops & Yoyo cards, but I think they’ll do the trick. And here’s to dads who are off the grid so there’s no worry of them seeing it before Sunday! 😉

🙂 I just had a happy moment because I remembered that we are going to YoPop tonight! Lots of froyo shops may be sweeping the nation, but nothing beats YoPop!

🙂 I managed to get all of my exercises done this morning before 9:30.

😦 It was raining so I had to run on the treadmill.

🙂 There are no hills on the treadmill.

😦 The GPS screwed me over and somehow I ended up with a terrible score.

Lesson learned: You can’t turn the GPS on/off after you’ve started your workout. So make up your mind before you get going.

And somehow, the heart rate monitor was messed up again. It was working fine while I was running. But apparently it didn’t record properly once I got inside. Despite the technical difficulties, I had a decent run and felt like I could have run longer than 15 minutes in yellow.

🙂 Lola was posing for me today, so I painted her real quick.

🙂 This is what we call the duck bun:

🙂 And I had fun with some washi tape. 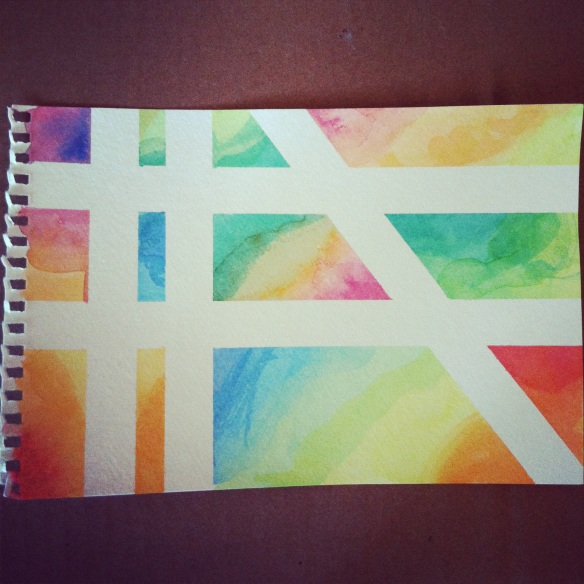 I have really enjoyed painting lately. If you can’t tell. 😉

I got up early again on Sunday (I know! What was I thinking?) to run before the heat set in. I wanted to try running on an empty stomach. Since I knew it was a fairly short run, without too much intensity, I thought I’d give it a try.

My legs felt heavy and I had an unusually hard time getting my heart rate up at the beginning. I know your heart rate is lowest first thing in the morning and thought that may have had something to do with it. But I felt like I was working hard and hadn’t even made it into the blue zone! (Blue = 3 out of 10 effort.) I also wet the sensor, thinking maybe somehow it wasn’t registering properly. Even though I had a hard go at the beginning, eventually my legs woke up and I felt better.

In the graph above, you can see I even managed to keep my bpm steady(ish) while climbing the last hill up to my house. I had to really pay attention to do that…

I was so glad I got my run out of the way early because that left me the rest of the day to get on with my next project!

Taping a giant canvas! Seriously, though, I was so sick of it I nearly didn’t finish. I spent at least 6 hours just taping. (I followed the instructions here. And apparently we had similar thoughts on colors!)

At this point, after I had painted several coats, I found myself a little nervous to peel the tape…

And when I started to peel, my fears were confirmed. 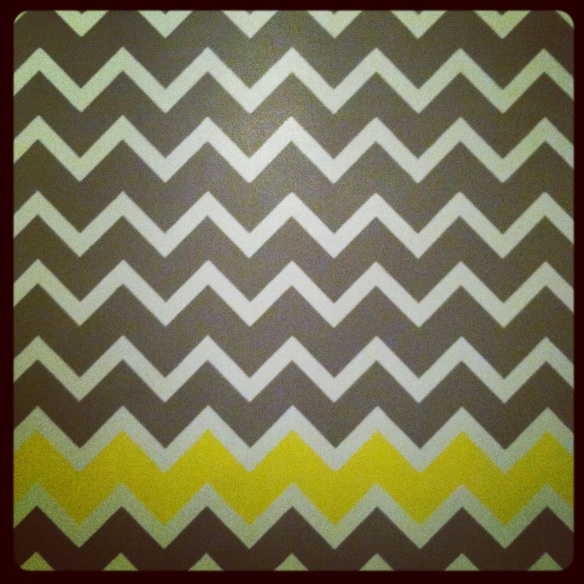 Fortunately (for me) you can’t see the details in this and how the paint leaked under the tape. Lesson learned: when using a canvas with deep texture, invest in better tape (like frog tape). Also fortunately, acetone nail polish remover helped me clean up the bad spots and I tried not to be such a perfectionist about the rest. I left it to dry overnight so I could hang it today.

When I got up this morning and checked on my plants, I found this little guy blooming! I really need to move this zucchini to its own box…

After getting some work done and going to the travel clinic this morning, I got my lift on with this little bad girl.

This is still one of my favorite stretches:

A few minutes into the stretches, my workout buddy had given up…

After dinner, we got the canvas hung on the wall! Since we’ve been married, we haven’t ever gotten real bedroom furniture, that money was always allocated to furnishing other parts of the house. So, in lieu of buying a bed frame with a headboard, I painted one. 🙂 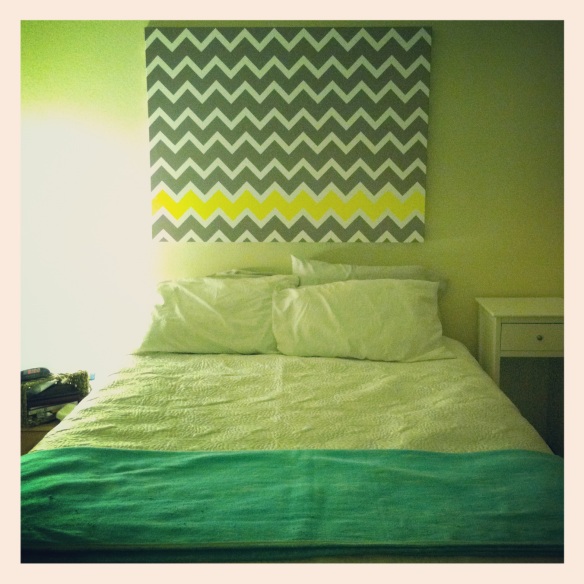 Pardon the white balance, the iPhone can only do so much. Even though it took forever, I’m glad I did it. One step closer to a grown-up bedroom! 🙂

And here’s a view with the rest of the room:

The bed skirt, curtains, and painting are much closer in color than they appear here. Blame the tungsten light. Now I want some big fluffy yellow throw pillows and a chaise lounge. And some legit night stands. And a gentleman’s chest. 🙂

A lot went down this weekend. Here’s the first half.

Friday night we hung out with our neighb’s for El Jefe’s birthday. The boys played FIFA while Ginna did some magazine sorting (more enjoyable than it sounds) and I did some crafting.

I’ve been using a process I learned in 2nd grade art class and have gotten a few questions about it. So here’s another break down. I printed out some lyrics 10″x10″ (over two pages taped together) to be used on a 12″x12″ canvas. You can see how I scribbled with pencil on the back of the words, first. I then lined up the lyrics, centered them on the canvas and taped it into place. Then I traced the outline of the letters, pressing firmly with a ballpoint pen, transferring the words to the canvas. I don’t think I’ll ever trace this many words again… it just took forever.

Here’s how it looks without the paper, partially painted. 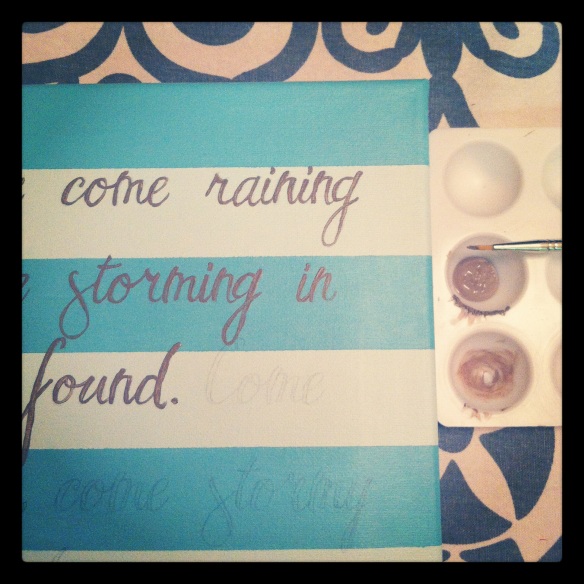 And after one coat of paint.

In between coats of paint, I added the final touch to my country paintings, some love. ❤

I was going to use gold paint, but there was come crazy warning on the packaging that said it included an ingredient known in California to cause cancer. So, instead, I used Martha Stewart’s foil transfer sheets and loved how it turned out.

Saturday morning I got up (fairly) early for my run. 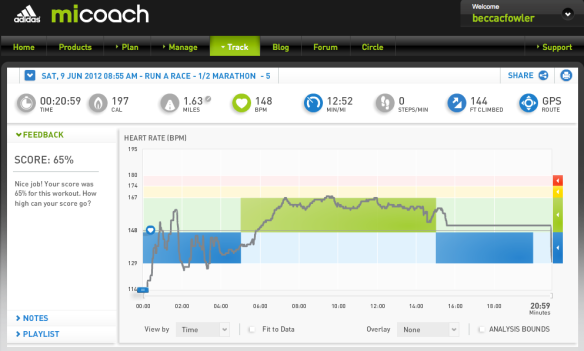 Clearly the heart rate monitor wasn’t working properly… unless I have some magical ability to maintain a 152bpm while jogging.

It was a beautiful morning, warm but not muggy. 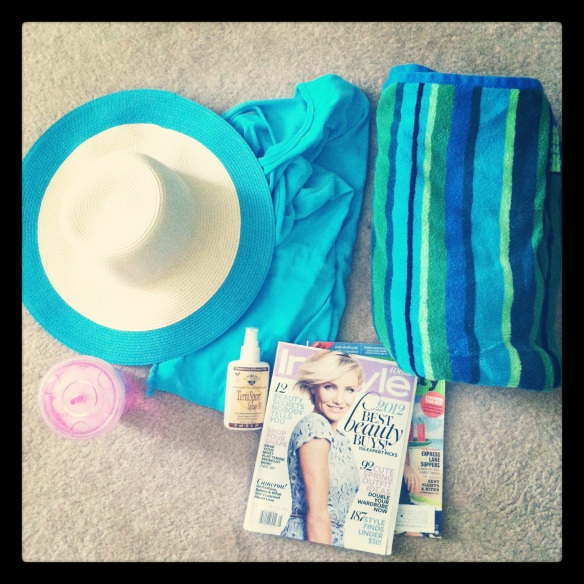 Ginna, Julie, and I went to the pool in the afternoon… along with all the drunkards in our apartment complex. 😉 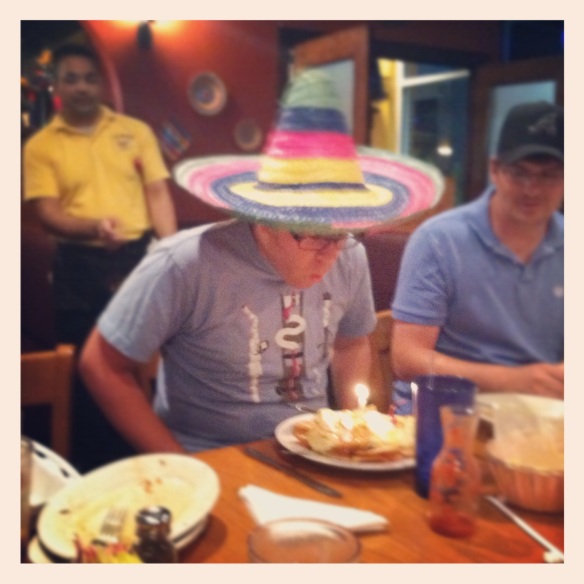 After church on Saturday we celebrated El Jefe’s birthday again with lots more friends. Then we had some amazing cake at the after party!

This last week was filled with friends, fun, and amazing weather!

On Friday we celebrated our friends’ baby’s first birthday. She is just the cutest thing EVER. Honestly, there’s no point in me having children if they’re not going to be this cute. This is one of my favorite pictures with her. She had a major freak out when we all (8 of us, 4 of whom were her family) softly sang happy birthday while looking at her. So she only let me cuddle her for a little bit like this. But it was presh. 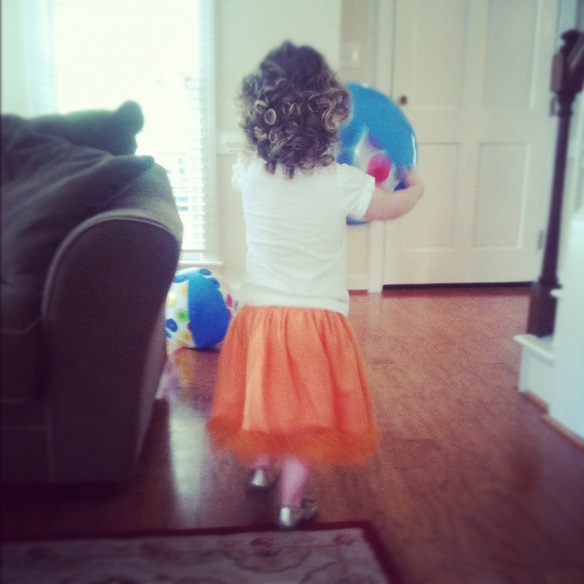 I’m babysitting again for 2 weeks for the toddler. She’s hilarious as always. And her English is getting better. 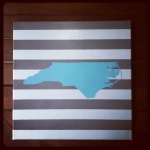 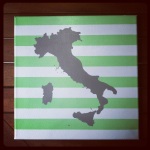 I also nearly-completed a few more paintings. All that’s left is adding some love. 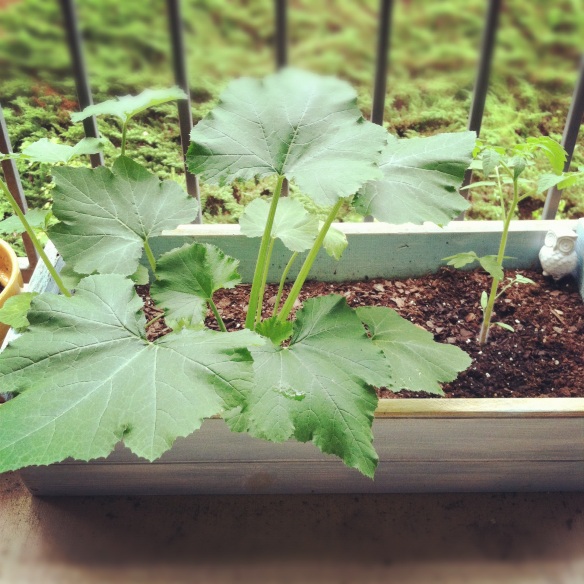 The weather has been lovely. Hot and humid with rain and storms. My zucchini is threatening to take over the planter. 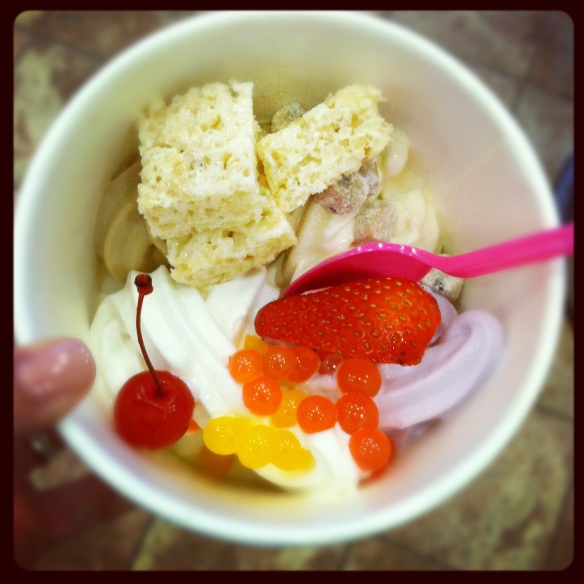 The return of warm weather also means walks to YoPop. Yum. I’m also really digging this nail polish. It makes me look “tan” and stays on for so long!

A few other highlights include running lots (almost 30 miles in the last 2 weeks… huge for me!) and using coconut oil for many things other than cooking. 🙂

Error: Twitter did not respond. Please wait a few minutes and refresh this page.